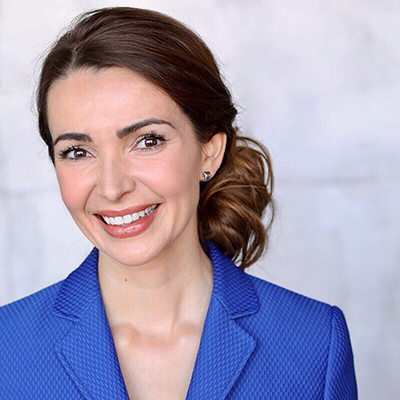 A trailblazer in young women’s leadership, Julie is bringing world-class, evidence-based, applied-neuroscience leadership coaching and development—normally reserved for executives in the C-suite—to reach girls and young women, when it can have the most profound impact: in high schools.

A former Senior Management Consultant in leadership development for the Pentagon, Julie is recognized as the “World’s #1 Coach for Young Women” by leadership coach and thought leader, Marshall Goldsmith, and was named to the Thinkers50 Coaching and Mentoring Shortlist (Top 8 Coaches).

Julie founded The Leadership Development Institute for Young Women — an initiative supported and advised by a team of the world’s top thought leaders in coaching and leader development who came together to champion this movement from Harvard, The U.S. Military Academy at West Point, The Center on Leadership and Ethics at the Fuqua School of Business at Duke University, The Doerr Institute for New Leaders at Rice University, The Kellogg School of Management at Northwestern, Marshall Goldsmith’s 100 Coaches and others. By bringing world-class leadership coaching practices to equip and certify high school educators as leadership coaches for students within a set framework and best-practice curriculum, Julie is helping to transform education and closing the gender based leadership and confidence gaps when they start—resulting in dramatic increases in girls’ leader identity, growth mindset, confidence and even academic performance for underserved students.

A global authority on leadership and coaching for young women and a Fellow at the Institute of Coaching, Julie has been featured on NBC’s Today Show, and in Forbes and The New York Times. As an author, she has written the US national bestseller, Girls Lead, and the world’s first evidence-based, applied-neuroscience leadership development and coaching curriculum for young women, The Leadership Course. She is also a contributing author to Insights on Coaching, The Success Principles for Teens and many other publications.

As an Advisory Board Member for The United Nations Foundation’s Girl Up program, Julie is also working to scale equitable, evidence-based leadership coaching and development for girls globally. As a speaker, she has addressed audiences of up to 70,000 and reached over a million youth, young women and girls, worldwide.

Julie was recently included on the Thinkers50 “Radar List” as one of the top 30 emerging leadership thinkers whose new ideas are changing the world. Because of her groundbreaking leadership work and coaching for young women, she was also recognized as the “Woman of the Decade for Girl Empowerment” by the Women Economic Forum.