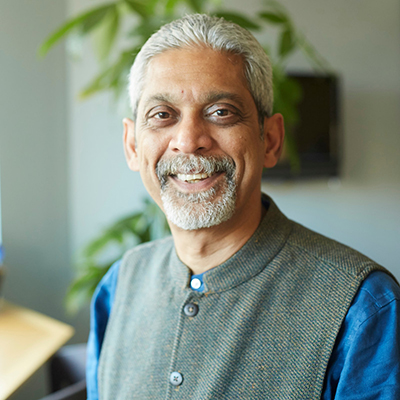 To close our our second day is Vikram Patel. Vikram's group at Harvard Medical school has been working on the global epidemic of mental illness, and he will be presenting on efforts to apply coaching techniques and enabling large scale improvements in mental health.

Vikram Patel is The Pershing Square Professor of Global Health and Wellcome Trust Principal Research Fellow at the Harvard Medical School. He co-leads the GlobalMentalHealth@Harvard initiative. His work has focused on the burden of mental health problems, their association with social disadvantage, and the use of community resources for their prevention and treatment. He is a co-founder of the Movement for Global Mental Health, the Centre for Global Mental Health (at the London School of Hygiene & Tropical Medicine), the Mental Health Innovations Network, and Sangath, an Indian NGO which won the WHO Public Health Champion of India prize. He is a Fellow of the UK's Academy of Medical Sciences and has served on the Committee which drafted India’s first National Mental Health Policy and the WHO High Level Independent Commission for NCDs. He has been awarded the Chalmers Medal, the Sarnat Prize, the Pardes Humanitarian Prize, an Honorary OBE and the John Dirk Canada Gairdner Award in Global Health. He was listed in TIME Magazine’s 100 most influential persons of the year in 2015.