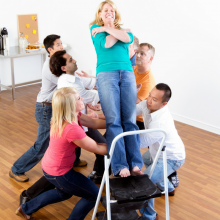 Have you ever had good news to share with the world and no one seemed to care as much as you did? Once, when I received an offer from a prestigious university to create and deliver a coaching diploma program and I successfully completed it after a few stressful months of changes in direction, I told a friend my news. I was proud to share my completion news with her as she had supported me throughout the uncertainty. She acknowledged the victory. “That’s great news!” she said, and then she changed the subject. I was left feeling a disconnect and, frankly, a bit hurt. I was expecting for her to show more interest in a constructive way. I wanted to feel or know that she was happy for the positive outcome and was curious to know about how it finally all came together.

Well, that’s where active and constructive responding comes in.

Research has found that our response to positive news is actually a better predictor of the long-term success of a relationship than our response to negative news. It upsets us when people rain on our parade. We don’t like our joy being squashed. We want those around us to participate in our celebration. Unfortunately, though, those around us may respond by changing the topic, dismissing our news, or making a critical remark diminishing its value. These types of responses shut down our ability to trust and connect with that person, be it at home, work, or while coaching our clients.

The amygdala, the most primitive part of our brain, is always on the alert for threats to our physical and emotional safety. What’s more, it responds much more quickly than the area of our brain that processes logical thought, namely the Prefrontal Cortex. Therefore, a negative response can ever so quickly lead to disconnect and mistrust.

The studies of Barbara Fredrickson (professor of Psychology at University of North Carolina at Chapel Hill) concluded that experiences causing negative emotions trigger a fight-or-flight survival response in the brain. In this negative “away” emotional state, there is a tendency to avoid risk; we become distracted, closed down, fearful, angry, low in confidence, and inclined to retreat. We go into what I call protection mode.

A person cannot connect while experiencing an away state -- threatening emotions. In stark contrast, positive emotions resulting from positive responses, evoke the opposite reaction, creating a “toward” state. Experiencing a positive toward emotional state may be described as feeling alert, interested, receptive, open to possibilities, and hence, more conducive to learning as well as relationship building.

It is extremely important for coaches or leaders, in particular, to be mindful of how to avoid or minimize negative emotions and maximize positive emotions if we wish to create an environment ripe for development of these relationships as well as our ability to successfully facilitate the growth of others.

What was particularly surprising in her research with couples is that a passive yet constructive response did not lead to stronger relationships. Only an active constructive response brought couples closer together. Basically, when we share good news and the other person does not respond with sincere and deep interest, we withdraw and protect our hearts from their seeming dismissal, apathy, or worse yet, devaluing of what we perceive in our mind to be a triumph.

An active constructive response involves acknowledging the other person’s joy, validating it, and discovering more about its source. It might sound like, “I know how important it was for you to have the senior leadership team recognize your contribution with a promotion. You totally deserve this. How do you feel?! How do you plan on decorating your office? Oh gosh. This is exciting.”

Another example is that team members need to know that other members of the team will give them the equivalent of a high-five when they have a victory as opposed to responding with jealousy or apathy. In order to create a team where it is safe to say “Oh no. I really messed up…” or “I am struggling with…”, we also need to be able to say “I was able to come up with a unique solution that will save the company a million dollars this year alone!” and know our colleagues will honor our accomplishment through the use of positive energy and language in the form of a sincere acknowledgement, validation, and curiosity.

A passive constructive response might involve looking up briefly from one’s work to say, “Oh wow. That’s cool!” Then, going back to work as though nothing happened. Though technically the response is positive, it comes across as dismissive and does not communicate to the person who has experienced the win that we are invested in them.

Active or passive destructive responses are often dismissive or downright rude. For example, a coworker may ignore that you said anything at all or say, “They’re going to give you a lot more responsibility with that promotion. I wouldn't want to be you right now. I told you to be careful what you ask for!”

Let’s face it, active constructive responding is rare. When it occurs, it is nothing less than a profound experience that deepens our confidence and lets us know we are seen, valued and cared about.

Whether coaching clients, leading a team, or nurturing your significant relationships, consider how you may be able to up your game by actively and constructively acknowledging the accomplishments of the people you care about.

“It is an absolute human certainty that no one can know his own beauty or perceive a sense of his own worth until it has been reflected back to him in the mirror of another loving, caring human being.”
John Joseph Powell