Ready for a Tech Upgrade: Part 1 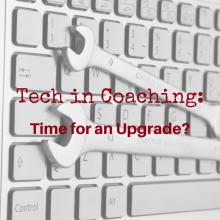 Are you ready for a technology upgrade? Many of your coaching clients have already upgraded. They’re already using productivity and biometric apps and devices. This first in a series of three articles looks at ways to repurpose these tools across all phases of a coaching process and for a wide range of coaching goals. The second article will cover People Analytics and its potential impact on coaching; the third explores future scenarios such as ‘coach-bots’ interacting with leaders who may or may not work with a human coach.

Starting with the relatively traditional coaching roadmap below, each step in the coaching process – from setting goals to evaluating results – can be reinforced through technology:

During this journey, many leaders will work with coaches to clarify their (leaders’) values and build their self-regulation skills. For this work, tools such as these facilitate the leader’s work in between coaching sessions:

In addition to bringing data from this work on values and emotional states to their next coaching session, leaders can also share biometric data that are relevant to their effectiveness and development.

No longer limited to the niches of elite sports or The Quantified Self, biometric devices have reached a consumer-friendly juncture of convenience, efficiency, price and style. Leaders and coaches have choices of devices and wearables with functionality such as:

For example, user-friendly apps track heart rate variability, a widely-endorsed metric of heart fitness, physiological resilience and behavioral flexibility, (Fernandez, et al., 2013; Moore, 2016; HeartMath). The measurement of cortisol in saliva has already moved from clinical settings to the workplace. One study team has already accurately predicted salivary cortisol and stress levels in a leader through analysis of tone of voice. (Konnikova, 2014). In the near future, your leaders can receive a cortisol assay within about five minutes of generating their saliva samples.

A Microsoft wearable, described as a Mood T Shirt in the general press, captures heart rate, skin temperature and physical movement, interprets the wearer’s emotional state, e.g., “stressed”, and conveys this finding to him. This wearable intervenes with vibration pulses, removal of heat from his body and soothing, slow music.

Some neurofeedback products also intervene to shift the user’s state. Product providers in this niche use blends of visuals, sounds, guided meditations and real time neurofeedback to assist users in returning to performance-ready states. Thync, for example, uses neuro-signaling to stimulate specific brain pathways that induce a calm or energized state. The promise from some companies is that users, with practice, can bring on this state on demand.

We may be able to eliminate a common speed bump in coaching by helping leaders find time for coaching sessions, experiments and reflection. Google Calendar’s Goals, originally designed by Dan Ariely, uses machine learning and the users’ goals to serve up suggestions for open time slots. It works with time dynamically, taking account of sudden changes such as an urgent teleconference as well as fluctuations in alertness during the day.

Nonetheless, organizational buyers of coaching and coaches can make informed selections through due diligence of tools that covers:

When using tools such as those discussed in this article, leaders may be more engaged in the work in between coaching sessions. They will bring more data – visuals from devices, stakeholder input, results of experiments and reflections on their development – to coaching sessions. Leaders and coaches will still use sessions to refresh the commitment to actions based on goals and insights. And then the app kicks in to keep it going.

This article includes a small, representative sample of tools with functionality that is useful in coaching. The mention of a specific product is not an endorsement. That means there are no hyperlinks to product sites. I am grateful for the generous input of Margaret Moore, cited in the References section, whose thinking on these matters is reflected in this article.

Coates, John. (2013). The Hour between Dog and Wolf: Risk-Taking, Gut Feelings and the Biology of Boom and Bust. London: Fourth Estate.

Kegan, R., Lahey L. L., (2009). Immunity to Change: How to Overcome It and Unlock the Potential in Yourself and Your Organization. Boston: Harvard Business Review Press.

Wilson, Timothy D. (2015). Redirect: Changing the Stories We Live By. Back Bay Books.